Yesterday, SAMARITAN INTERNATIONAL (SAM.I.) handed over its seven calls for policy change to alleviate the European refugee crisis to Federica Mogherini, the EU’s High Representative for Foreign Affairs and Security Policy.
For the European Parliament its President Martin Schulz met with SAM.I. representatives.

More than 170,000 people crossed the Mediterranean in 2014 to seek refuge in the EU. In 2015 alone, 1,600 people have died during the attempt.
In the statement titled “Seven calls for change to alleviate the European refugee crisis”, SAM.I. calls upon the EU and its member states to expand their aid measures and to live up to their shared humanitarian responsibility.

SAM.I. also highlights the important role that volunteers play in emergency aid and integration services. “At the moment it’s first and foremost volunteers who offer support for refugees.”, Knut Fleckenstein, MEP and President of SAMARITAN INTERNATIONAL explains. “They care for them, supply them with food, clothing, blankets or medicine. But with the increasing number of refugees, volunteers are reaching their limits.” 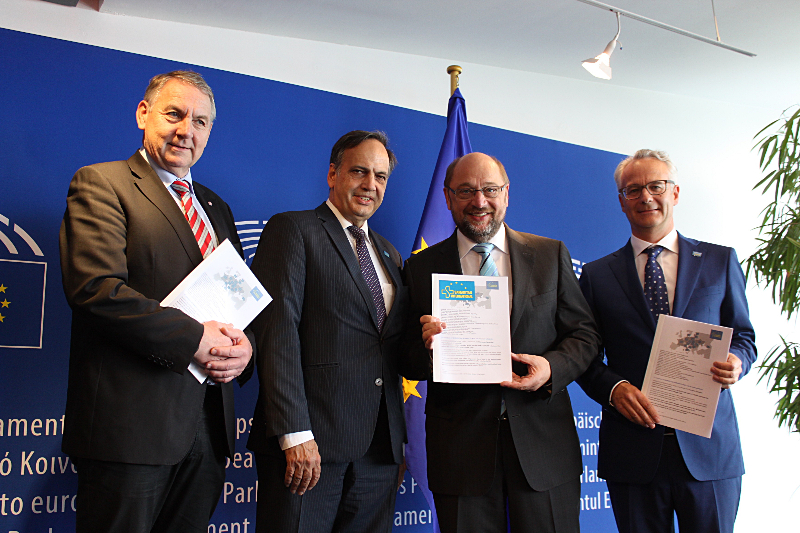 Drawing consequences from the fact that the crises in the refugees’ countries of origin will not end in the foreseeable future, the Samaritan organisations demand a sustainable and integrative approach that ensures psychosocial care, appropriate housing and fosters an immigrant-friendly culture to help refugees to “arrive” and build a life for themselves.

The statement was handed over to Ms Federica Mogherini, Vice-President of the European Commission and High Representative of the European Union for Foreign Affairs and Security Policy, and Mr Martin Schulz, President of the European Parliament. “The effort many volunteers put into aiding refugees is impressive” remarked Schulz after receiving the statement. Federica Mogherini added: “The commitment of volunteers forms a strong basis. With better framework conditions, however, they could render their indispensable aid more effectively.” 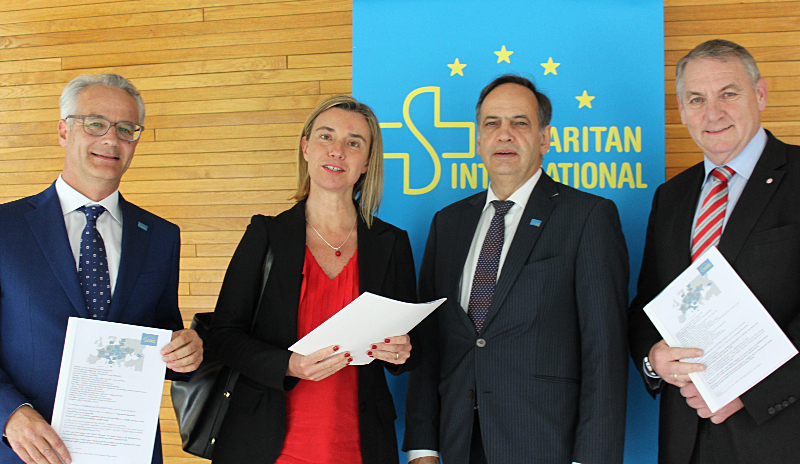 Federica Mogherini, High Representative of the EU for Foreign Affairs and Security Policy (2nd from right) with the SAM.I. representatives. Photo: Hörle/ASB

SAM.I. calls for the recognition and the support of the crucial contributions of volunteers. In particular, a solidarity fund to support volunteer associations giving assistance to refugees has to be established. Employers and local authorities are called upon to create enabling conditions for volunteers.

As member of SOLIDAR, SAM.I. also explicitly supports their recent letter to the European Council and shares their conviction that humanitarian corridors as well as a fair distribution mechanism among the EU member states are direly needed.

The volunteers and employees of several SAM.I. members are working to support refugees and asylum seekers in and from more than 15 countries. Their expertise reaches from from immediate relief over running refugee facilities to long term (re-)integration. For more information, see this document on best practice examples.

The statement “Seven calls for change to alleviate the European refugee crisis” is available here.